Karate Kata and Zen in Arizona

It was in 1964, I walked into my first dojo (karate school): the Black Eagle Federation Dojo where Oyama's Karate was taught. We were initially told we were training in Goju-Ryu Karate, but later it was established we were students of Kyokushin Kai. It didn't matter to us, all we knew was we were learning karate. The dojo was small, musty and very primitive. The smell of stale sweat, blood and tears permeated the school. Not only did we learn to block as hard as we punched, we learned full contact karate and the only protective gear was an athletic cup: any part of the body was open to attack - groin, feet, legs, arms, chest and even the neck and face - we quickly learned to block effectively for self-preservation.

"Would you walk into a wilderness without a map? Then why would you consider karate without kata?" Soke Hausel

It was the toughest training I ever went through - but I was only a teenager. Years later, I found basic training in the Army to be a breeze after karate. Later, when I was at the University of Wyoming, I discovered a martial arts association that was just as tough as Kyokushin Kai but more demanding. This association had the added benefit of learning a wide variety of martial arts - it was the best move I had ever made in martial arts - I applied for membership to Juko Kai International. At JKI, we trained in many martial arts, were taught extreme body hardening: the variety was very important to me as it made martial arts exciting and interesting.

When I was at the Black Eagle Federation Dojo and later at the University of Utah Wado-Ryu Karate Club, we practiced kata: kata was shrouded in mystery. It seemed like we practiced kata for no reason other than to practice kata. There was no explanation to their purpose.

"The purpose of kata training is not to be bound by form but to transcend form and evolve."

It wasn't until much later, while a member of the University of New Mexico Karate Club, the University of Wyoming Shorin-Ryu Karate Club and at Juko Kai International, that I discovered kata contained everything one needed for self-defense, comprehension, training - it was like reaching enlightenment in Zen. Kata is a training method unique to traditional martial arts. It teaches power, balance, acceleration, mediation, self-defense and focus.

"If there is no kata, there is no karate, just kicking & punching", Soke Shoshin Nagamine (1907-1997)
In our system of Shorin-Ryu Karate and Kobudo, we have more than 70 kata. Each kata has its own bunkai (applications) and all students learn both the kata and the self-defense applications to progress. And both the kata and bunkai are not sacred. There are times of discovery that require one or the other, or both, to evolve.

"One must embrace thedo mu genproverb, there can be no end to learning and that karate begins and ends with the study of kata". Soke Shoshin Nagamine

Posted by Soke Hausel at 8:48 AM No comments: 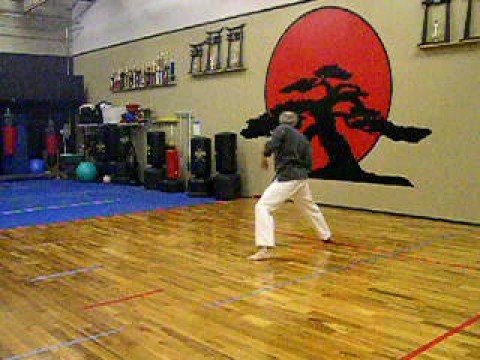